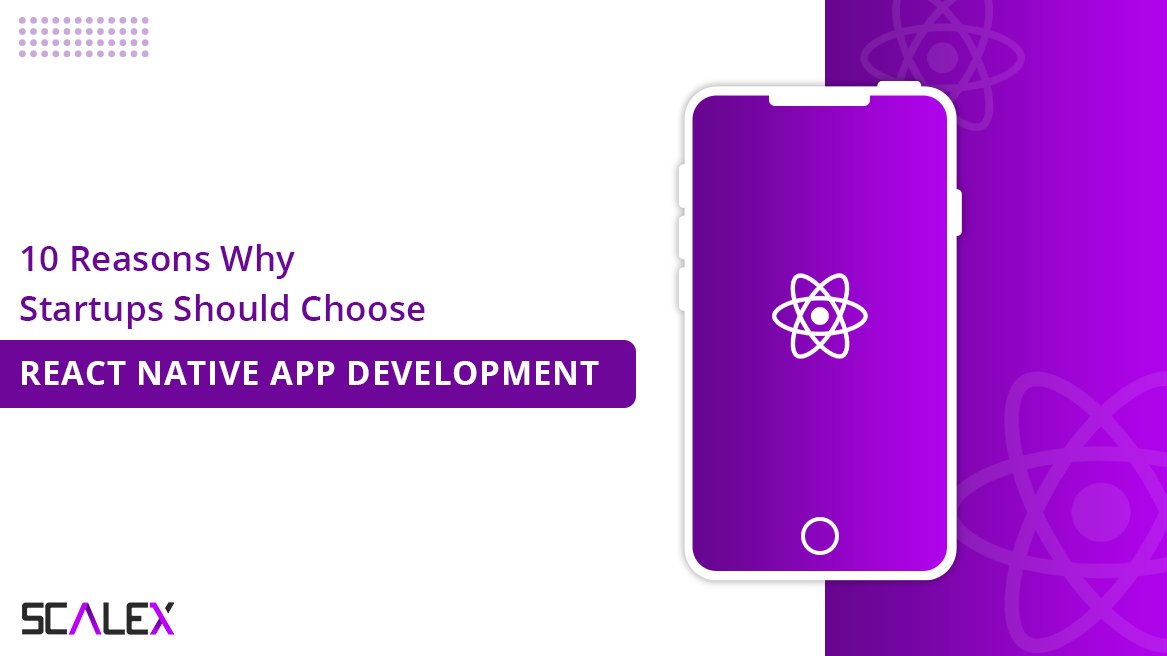 So you have decided to start up your venture and are now assessing various technologies in the market to choose the best one for your app!

As a business owner or an entrepreneur, when you are looking to build your startup, you are already occupied with planning how to deliver customers the product quickly and efficiently without losing the quality on the run. If you target to reach the majority of mobile users, you need a mobile app that offers a seamless experience on both Android and iOS platforms.

React Native is one of those cross-platform solutions. It’s one of the most widely used frameworks for mobile development. In this article, we’ll discuss React Native’s popularity, its benefits, companies using React Native, and the cost to develop one.

React Native is currently the trendiest development framework among developers allowing them to build versatile apps with the support of JavaScript data. It offers cross-platform compatibility features enabling app developers to build cross-platform apps without compromising the quality. Owing to features such as hot reload, code reusability, ease of third-party plugin integration, and many more React Native is a choice for many companies, from tech giants like Facebook to young startups.

The popularity of React Native

React Native is the perfect combination for developers who want to create native UI using the tool of their choice, Javascript. Facebook’s heavy involvement in React Native has gained a lot of trust and popularity over the years for the framework.

According to a 2020 developer survey by Statista, React Native is the most popular cross-platform mobile framework used by global developers. Its adoption rate is continuing to grow and overtake the competition. 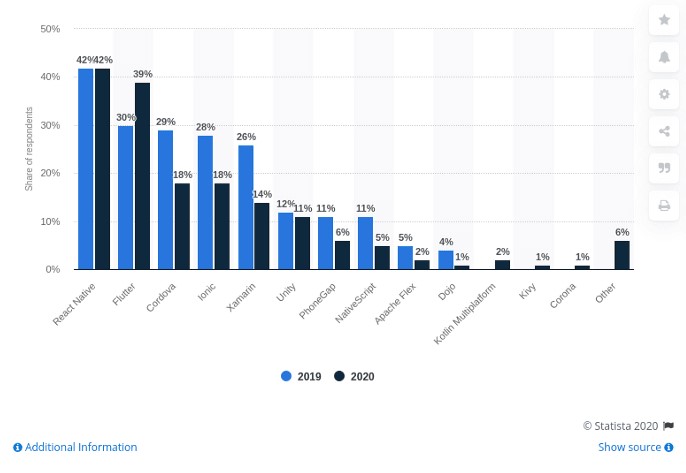 What started as an experiment in a hackathon in 2013 is now a profound platform backed by a strong developer community that believes in open source and support for each other. Since then, React Native has grown by leaps and bounds. Currently, React Native is the third most popular framework, right after Kotlin and Android Architecture Components, as stated in Appbrain.

React Native has shown relevant growth during the last five years and is still one of the most loved products among frameworks, libraries, and tools.

Due to its popularity and convenience, React Native development is used to power some of the world’s top mobile apps, including Instagram, Facebook, and Skype. Before we dive into the benefits of React Native, let’s see some popular applications that are built using this trend-setting technology.

It doesn’t look like React Native is slowing down. In just a couple of years, it has become one of the top solutions used for cross-platform mobile app development.

You’ve now discovered some of the famous companies using React Native, but you’re still not sure if you should use it for your app? Let’s discuss the benefits of React Native app development for startups.

Looking at the benefits of React Native technology, thousands of companies have adopted the technology. And, now that we know React Native is a good choice for mobile app development, let’s discuss its benefits and why it’s a better choice than other cross-platform frameworks.

React Native is a popular choice for those startups or entrepreneurs who need their app to be developed within a short time. React Native enables faster development because of its code reusability feature. More than 90% of the codebase is shared between iOS and Android. You can quickly launch the first version of your app with bare minimum functionality, your MVP, and keep everything else for later development.

React Native app costs much less than other native apps because of its code reusability feature. Developers can use a single codebase for Android and iOS app development. It allows developers to save time and effort in writing code again for the same components on a different platform.

React Native is the perfect platform for building native apps for cross-platforms, such as Android and iOS. React Native gives stability to the app and caters to transposable architecture. React Native allows developers to build only one app and share it between the platforms, effectively sharing up to 90% of the code.

For any startup to be successful, they need to develop an online presence faster with a limited budget. By choosing the React Native framework, you can write code once and run the app on iOS and Android. It makes the work much faster and smoother.

React Native focuses on building a great user experience for mobile devices, making it a suitable option for apps requiring high responsiveness and intuitive use.

One benefit of React Native is reusability within the app code. It’s easy to share a component from one part of the app with another part. It’s yet another reason that makes React Native development fast.

React Native application development offers amazing plugins that can add a layer of functionality to your mobile app. Developers can link these plugins to the native module and build faster, seamless, and feature-rich applications

JavaScript makes React Native a highly reliable framework in terms of security. React Native is perfect for cross-platform application development because it gives stability to the app and caters to transposable architecture.

React Native is backed by Facebook and has a large group of enthusiastic developers to support the framework. React Native is open source, which means there are always Github or Reddit threads to answer developers’ questions.

How much does it cost to build a React Native app?

There is no simple answer to this question due to multiple factors at play. Simple apps cost less, while complex apps cost more depending on the functionality. To build a react native app, you need to consider various factors, including platform, features, development company, developer’s charges, and the time it takes to build an app.

At Scalex, we have helped startups get the desired traction with React Native apps. Based on our extensive experience as a React Native app development company, we help you build high-performing cross-platform apps that deliver excellent engagement and conversions across platforms.

Looking to build a react native app! Get a free quote for your project now.

React Native is a relatively new solution in the field of software development, many companies and startups have already had the opportunity to use the technology, and their conclusions may help consider whether it is a good choice for your startup.

But again, choosing the appropriate technology is one of the things that add to the application’s success, so make sure you analyze everything before making any decision for your startup in terms of which technology to choose. If you’re confused about which technology is suitable for your app development project, get in touch with us, and we will be more than happy to offer you a free consultation.