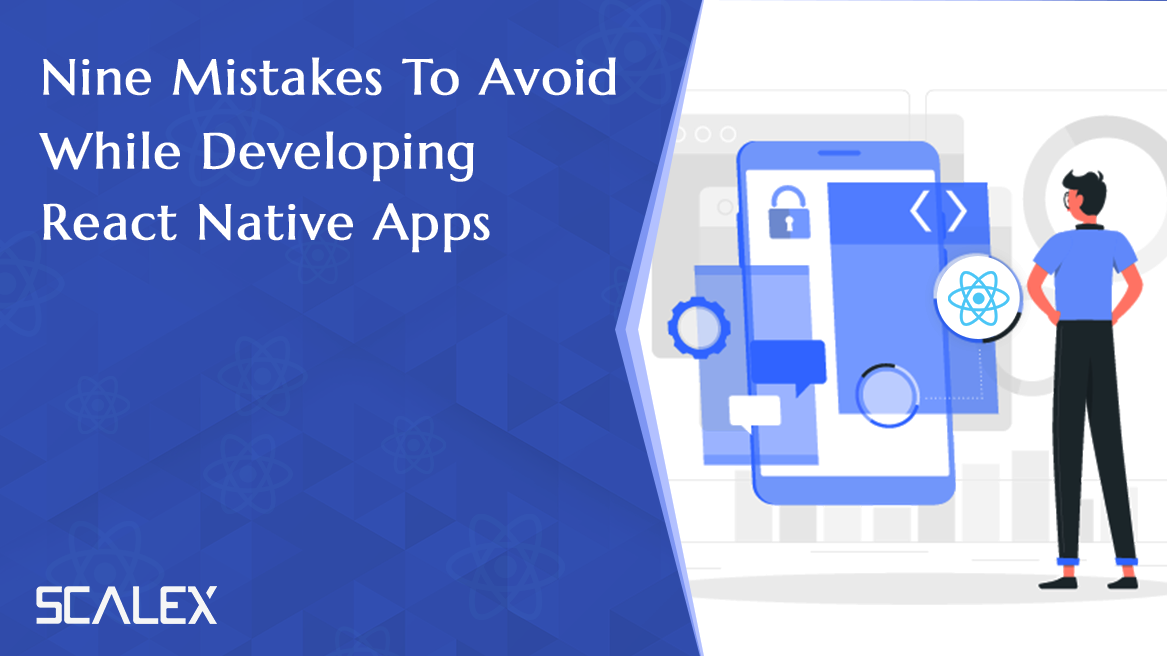 It’s crucial to decide the technology before starting the app development and the app must work across all the platforms according to the target audience. That’s the significant reason which made React Native apps popular among mobile app developers.

React Native is an open-source JavaScript framework launched by Facebook. It flawlessly works for both Android and iOS platforms and considerably reduces time and cost. One of the key advantages of using React is code reusability. Being easy to learn, it’s pretty easy to develop apps with React Native. React Native has open-source libraries containing pre-developed components, which increases development speed.

However, like with other technologies, developers can commit some mistakes while developing a React Native app that must be avoided. Let’s have a look at those common mistakes.

1. Making use of existing components

Being a developer, you must be well-conversant with pre-built elements like texts, footers, etc. It has several libraries that can be used. But these libraries could only be used if you don’t have any unique design layout.

2. Failing to design a separate layout for iOS and Android

Do you have different designs for iOS and Android versions?

You can easily use the platform API offered by React Native to make checks depending entirely on the device platform. Different layouts can be separated into other files if you have distinct designs. For instance, naming a file like index.ios.js when working for iOS, React Native will use the data to show the iOS layout. The same will apply to the android layout.

What about code duplication? It is also easy to move the duplicate codes into helpers and reutilize them.

Many developers make this mistake; make sure you are not a victim. As a developer, it’s common when we plan for the application; we focus more on layout and less on data handling. The Redux store solved this problem for us.

Redux helps in storing the data effectively and overseeing debugging application states. At the point when planned right, it tends to be a valuable asset for dealing with the application information. When not, it can destroy several things.

Have you ever thought of the worst things that can happen when you don’t use good coding practices? Extending the app will be a nightmare!

Worst of all, you get a lot of requirements, and you will need to change the code over time. The code is not extendable; you will be required to write thousands of lines of code! Make a plan before you start coding. But don’t be too careless to follow appropriate coding practices.

6. Failing to include unit tests

As a developer, ignorance should not be a part of you. It is basic knowledge that many applications can technically run without unit tests only known by developers. This is a big mistake! A unit test permits you to test segments of your application independently and ensures a particular functionality works as supposed to.

For instance, writing unit tests to check whether a prop passes to a component that was submitted on the browser or not. You may perhaps wonder why you would write such a test. Occasionally different CSS style blocks prop from displaying when you expect it to show automatically. Avoid spending time tracking down bugs! Write a unit test that will save you time.

7. Leaving the ‘console.log’ statement in the app

The developer can detect bugs quickly, aided by the ‘console.log’ statement. The report shows the specific line of code causing the problem and why the app is not functioning as expected. The developer is required to remove these statements after debugging. These statements harm app performance and slow down the app.

8. Making use of external modules

This is a common mistake done by developers while using react-native. This is an essential part and should be handled with maximum attention. The performance of the application is dependent on appropriate image optimization. The image has to optimize correctly for a successful project when developing a react native app.

Does this discourage you? If yes, these points should not be a barrier to your desire to enter the remarkable world of React Native. This should make you realize what is expected from you and how to eliminate errors. Yearn for a great experience and evolve with this technology to the future.

Grow your experience with React Native. Join the big community with many solutions, components, and structures. Don’t fear mistakes; learn from them.

Looking to build an app for your startup! Here are some reasons why should choose React Native app development.